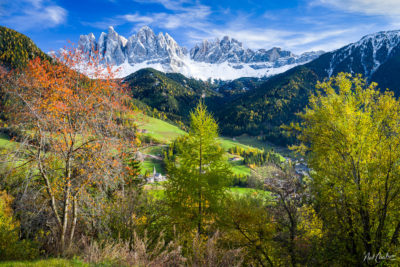 Photograph made near Santa Maddalena and the Dolomites, Italy features a sweeping vista that includes vibrant autumn colours and little alpine villages below a massive, rugged mountain range called the Geisler Group.
Fine art prints are available, click the image or click here for a larger preview and online ordering. 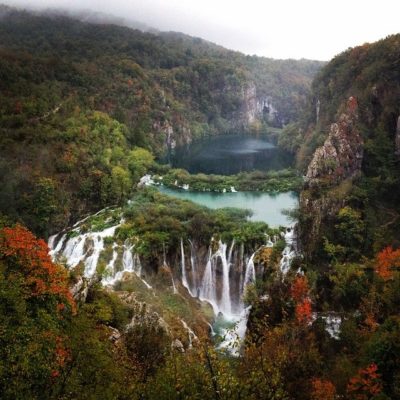 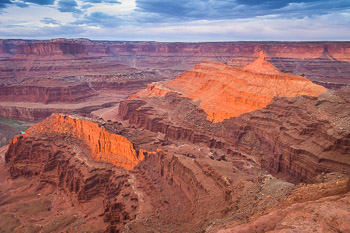 The rising sun illuminates the crests of sandstone canyons and spires in Canyonlands National Park, Utah.
Fine art prints available.
Click the image or click here for a larger preview. 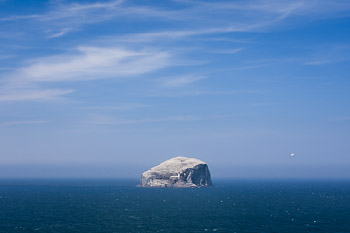 This landscape photograph shows Bass Rock, off the coast of North Berwick, Scotland, with a lone gannet flying in the blue sky.Bass Rock is a steep-sided volcanic rock, 107 meters (351 ft) at its highest point. It is home to the world’s largest single rock colony of gannets, with over 150,000 birds. Viewed from the mainland, the surface of the rock appears white due to the number of birds and their droppings.The rock is currently uninhabited, but historically has been settled by an early Christian hermit, and later was the site of an important castle, which was later used as a prison.The island was in the ownership of the Lauder family for almost six centuries, and now belongs to Sir Hew Hamilton-Dalrymple.The Bass Rock Lighthouse was constructed on the rock in 1902, and the remains of a chapel are located there.The Bass Rock features in numerous works of fiction, including Robert Louis Stevenson’s Catriona and The Lion is Rampant by contemporary Scottish novelist Ross Laidlaw.Fine art prints are available of this photograph. You can purchase standard prints online, or contact us for a custom quote.
Click the image or click here for a larger preview. 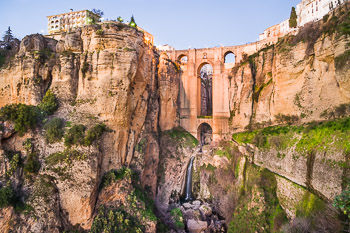 I made this scenic travel photograph at sunset in the village of Ronda, province of Malaga, Spain, during a two-week private photo tour with a client.
People have lived in the area around Ronda since prehistoric times. The town itself was founded by early Celts in the 6th century BC. The current town is of Roman origin and in the 2nd century BC received the title of city from Julius Caesar. Many centuries later, Ronda was conquered by the Islamic Berbers and served as the capital of a small kingdom. Islamic domination of Ronda came to an end in 1485 when the city was conquered by the Marquis of Cádiz.
Ronda was heavily affected by the Napoleonic Wars and the Spanish Civil War. Ernest Hemingway is believed to have modeled a story in ‘For Whom the Bell Tolls’ after events that occurred in Ronda.
The Puente Nuevo (‘New Bridge’) is one of three bridges that span El Tajo gorge, the deep canyon dividing the town. Building the bridge started in 1751 and was completed in 1793. It towers 120 meters (390 ft) above the canyon floor. The chamber beneath the central arch has been used for a variety of purposes, including a prison. During the 1936-1939 civil war both sides allegedly used the prison as a torture chamber for captured opponents, killing some by throwing them from the windows to the rocks at the bottom of the gorge.
Fine art prints of this photograph are available. You may purchase online or contact us for a custom quote.
Click the image or click here for a larger preview. 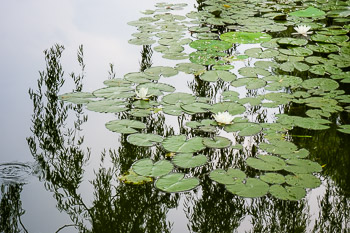 Amid the reflections of weeping willow boughs, large green lily pads and white lotus blossoms adorn the mirror surface of Lotus Lake in Black Bamboo Park (Zizhuyan Park), Haidan District, Beijing, China. Prints available in any size and on any material. Looks great as a full wall mural! Alternate versions with colour adjustments, including black-and-white, are also available. Contact us for a custom quote. Click the image or click here for a larger preview.

Want to supercharge your photographic skills?

Subscribe to Photographic Design Workshop to receive email with free tutorials, pro tips and special offers on our photography training programmes. You'll also get a free copy of 5 Creative Exercises for Developing Your Creative Vision.

You can unsubscribe any time.